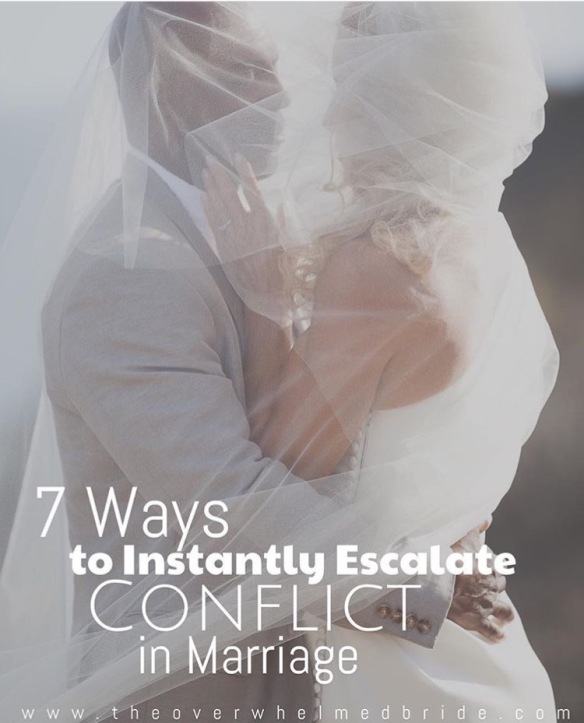 I loved this so much on http://www.theoverwhelmedbride.com I had to share ❤️

We’ve all read articles on how to avoid conflict, but does that mean our relationships are completely devoid of disagreements? I think you already know the answer to that question, but just in case, I’ll throw out a response for you. NO. At least in the case of my marriage, that is.

So if we can’t avoid conflict entirely, what can we do to help put out fires as quickly as possible? I’d give you a few ideas, but I think it would be a lot more fun if we took a look at this question from the opposite side of the coin. Let’s talk about…

1. Place all the blame on your opponent (ahem…spouse)

It’s pretty rare for one party to actually be 100% in the wrong, so to be on the safe side, just consider it an impossibility and own your part.

2. Walk away while the other person is still talking
7 Ways to Instantly Escalate Conflict
Some people need space in order to process things, calm down, and/or keep themselves from saying something they know they’ll regret 10 minutes later. But it’s still a good idea to set guidelines for taking a cool-off walk when you’re not in the middle of conflict. (i.e., “If we feel like we need to take a step back and clear our heads, we will verbally communicate that before excusing ourselves.”) Because from experience, pealing out for Whole Foods mid-argument is only a temporary high. And just because you cooled off while browsing the frozen produce aisle doesn’t mean he’s been doing the same at home.

Letting a big one fly might feel like it’s helping you make your point in the moment, but what it’s really doing is taking your argument from innocuous to explosive in 10 seconds or less.

You get the idea…

Raise your voice in a public place. Argue in front of your in-laws. Cause a general sense of discomfort and embarrassment. Whichever you choose, it will not go well for you.

6. Give your spouse the silent treatment

Guaranteed to cause enormous levels of frustration, especially if your spouse is a “talk it out” kind of person.

7. Bring up the past

Maybe it’s an old argument. Maybe it’s an old girlfriend. Either way, if the hatchet has been buried (and by “buried” I mean healthily resolved and previously forgiven), then by all means leave it there. If you want to cut your spouse to the core and cause a serious rift in your relationship, resurrect an indiscretion or stoke the fire of their shame. There’s almost nothing more painful than weaponizing the past and using it against the person we promised to love no matter what.

I’d close out this column by telling you that everything on this list should be classified as “do not try this at home,” but again…you already know. Let’s do a little experimenting with the opposite—acknowledging our part, hearing out our spouse, controlling our response, avoiding “always” and “never,” remaining in the present—and see how quickly we’re able to move from meltdown to make-up the next time conflict occurs.